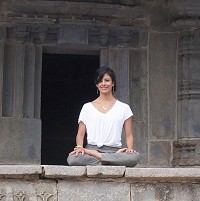 Giuliana started practicing Ashtanga yoga in 2010, in Lisbon, Portugal. Since then, she has maintained a daily practice in the different cities in which she has lived: Houston, Lima, Lisbon and London. After being committed to a daily practice for six years, Giuliana joined Ashtanga Yoga Peru as an assisting teacher. This experience was followed by a move to Lisbon to start as an assistant teacher at Casa Vinyasa Lisbon, where she developed into a resident teacher.

Currently, as a physiotherapy student at St. George’s University of London, Giuliana is incorporating a new range of skills in areas such as anatomy, biomechanics, and body movement into her teachings. She believes the asana practice initiates each student into a path of self-discovery and personal development. As such, when the Ashtanga method is practiced with awareness and respect for oneself, it becomes a precious tool for daily life, which with time, will increase overall endurance translating into a steady/strong body and mind.

In 2014 Giuliana made her first trip to Mysore, India, a city to which she often returns to study Ashtanga yoga with R. Sharath Jois, at KPJAYI.